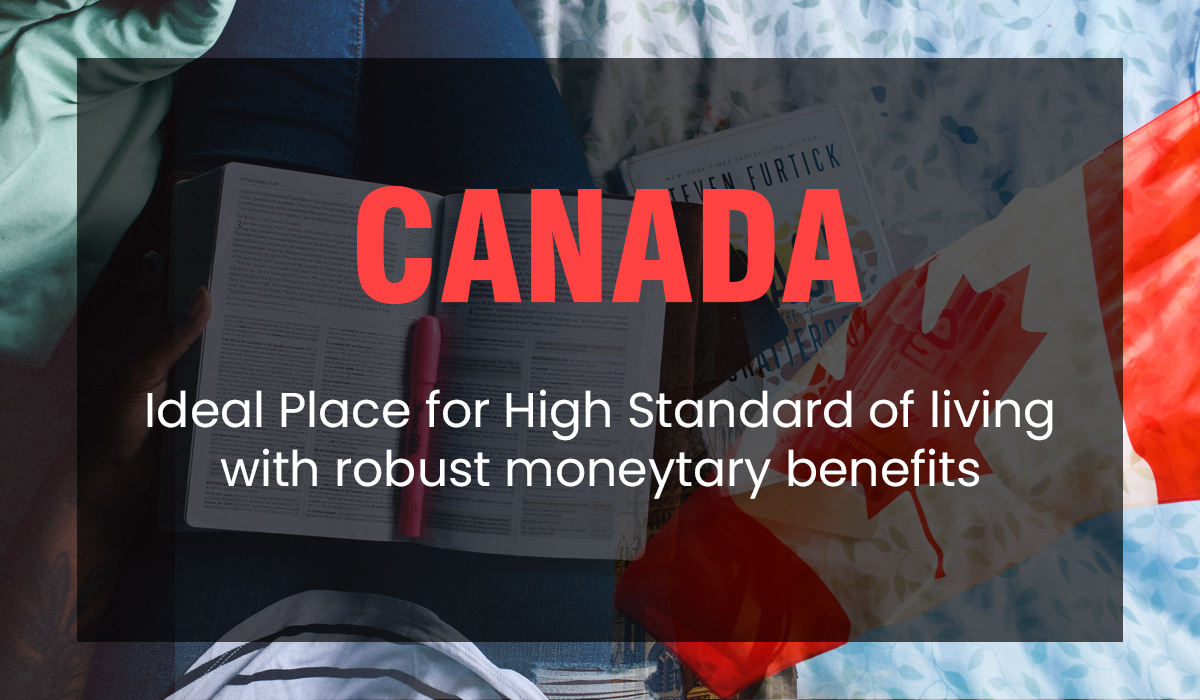 Also known as “The Great White North”, Canada is the second-largest country in the world with a large amount of frozen Arctic tundra and snow. Foreigners are moving to Canada and are settling in cities and towns all over the country. Each city, large or small, has its own unique set of characteristics that differentiate and define it. The unique characteristics of each city are evaluated in choosing the best places to live in Canada as an immigrant.

Canada was named as the most peaceful country across the world by The Economist in 2007.

Canada is one of the safest, most comfortable countries on earth, with citizens who enjoy generally contented lives free from substantial hardship.

Canadians enjoy a very high standard of living due to the strength of the Canadian economy.

The average Canadian life expectancy is 80 years for men and 84 years for women.

It is a safe and secure destination to settle. Immigrants with permanent residency in Canada have all the rights under Canadian Charter 6 to be protected by the government and authorities.

Canada has so much to offer and it is not surprising that it has one of the highest per-capita immigration rates in the world.

So want to accomplish your Canadian Dream?

Nothing to worry about when you have MIS Consultants.

1. The right to live, study and work anywhere in Canada
Canada is the second-best country in the world to live and work as per the world rankings. overall sustainability, cultural influence, economic influence, entrepreneurship, and primarily for the quality of life is something that this nation offers to its citizens.

4. The chance to become a Canadian citizen
permanent resident status in Canada means you can live in Canada for 5 years. Once you have completed your physical presence in the country for 1,095 days (three years) out of the five, you become eligible for Canadian citizenship.

5. The guarantee no one can take your permanent residency away from you
That is the sweetest reality. All the efforts count and Canadian immigration machinery abide by the laws of fair and smooth P.R process which is infallible.

Top Canadian Cities you can have in your options list.

Some of the most developed cities in the world are in Canada, be it –

Toronto
Toronto is the largest city in Canada and also one of the most desirable cities to live in, in the world.

Toronto is also known as Canada’s financial capital. Also, You can’t mention Toronto without thinking of the iconic CN Tower, and many tourists take the time to visit popular destinations like Toronto Island, Casa Loma, and the Toronto Zoo as well. There are world-famous museums, like the Art Gallery of Ontario (the AGO) and the Royal Ontario Museum (the ROM), and other major attractions like the Hockey Hall of Fame and Nathan Phillips Square.

A good thing about the city is the extensive public transportation system which will make it easier for people to move here.

Vancouver
Vancouver is a popular destination due to its natural landscape and diverse cultures and is ideal for a wide range of outdoor activities such as surfing, skiing, and whale watching.

Vancouver has world-class education and healthcare facilities as well as a multicultural environment which make it the best place to live in Canada.

Also, Vancouver has a strong economy and plenty of employment opportunities in a number of industries such as telecommunications, technology, mining, construction, tourism and hospitality, finance and forestry.

Montreal
Also known as the cultural capital of Canada, Even though a French-speaking city in Canada, Montreal still ranks highly as a destination for Foreigners moving into Canada.

Compared to Toronto and Vancouver, Montreal has affordable property both for purchase and rental purposes. The city is served by extensive public transportation in the form of a metro and bus service that adequately serves the needs of all inhabitants.

Quebec City
Quebec City is a French-speaking city (though most people speak English in the popular tourist areas) that is rich in culture and history.

Lovers of art and all things ornate will feel like kids in a candy store in Quebec City.

Beauty is everywhere you look, from architectural details to exceptional museums like the Musée national des beaux-arts du Québec.

Ottowa
Ottawa is the nation’s capital and is yet another location for foreigners seeking to relocate to Canada. The city is multicultural and is home to many technology startups. A guided tour of the Parliament Building on Parliament Hill will give you a peek into the world of the Canadian government — and the building itself is quite a masterpiece. The city is also home to some of the best museums and galleries in the country.

So what are you waiting for? Contact MIS Consultants, your trusted partner that is eagerly waiting to help you in fulfilling your Canadian dream.